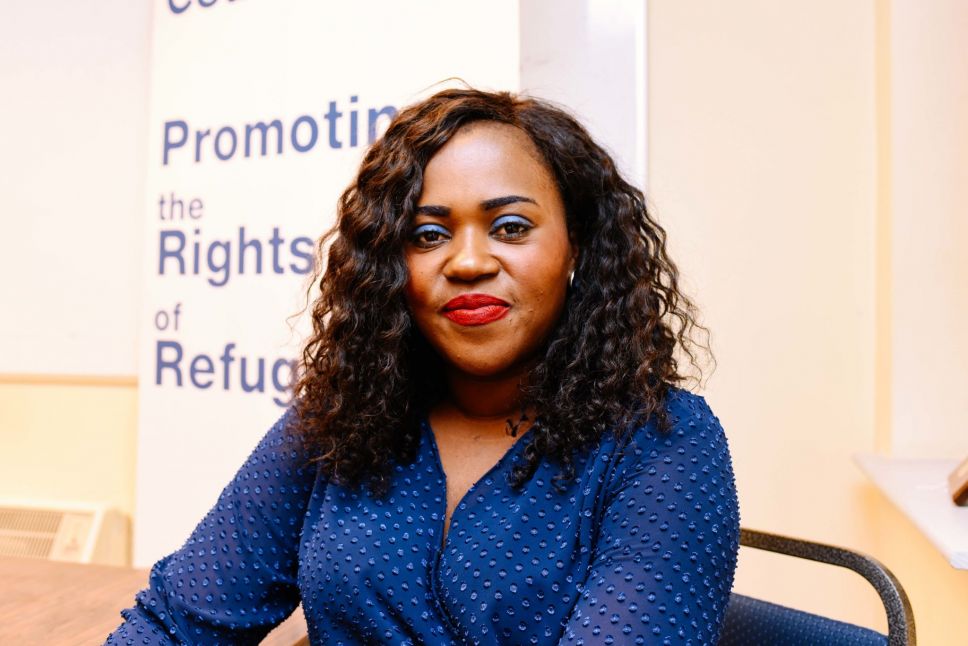 When Ellie Kisyombe, a Malawian refugee who has spent nearly a decade in direct Provision, announced that she’d be running for Dublin City Council in May, she immediately shed renewed light on one of Ireland’s most shameful policies. Peter McGoran talks to the activist, campaigner, chef and mother who’s beloved by foodies, has Irish racists on the backfoot, and who’s intent giving Irish politics a much needed kick up the arse.

It’s 4pm in the Irish Refugee Council in Dublin. While your Hot Press journalist sits down in a quiet meeting room, Ellie Kisyombe is busy in the kitchen preparing a selection of Middle Eastern sweet treats for us. She’s is an incredibly busy woman (this is her third national interview on this day alone), but food always comes first for her.

It’s been almost 12 hours since Ellie’s day started. Her normal daily routine involves waking up at 4.30am each morning and getting from the north side of the city, where she lives, to the south in order to open Our Table, her not-for-profit community-driven restaurant, which she set up with food writer Michelle Dermody in order to open up the conversation around direct provision.

“Our Table was formed on the inspiration that asylum seekers in Ireland are not allowed to cook,” she tells me. “Not even being able to make or enjoy food from their own background, not being able to go to the market, buy ingredients, source them, get them to their kitchen, make food from scratch.”

Beyond the desire to consume good food, the act of cooking, as well as the cultural connection it has for many refugees to make their local/national dishes, has huge importance. But beyond that, the idea of Our Table also meant that the heavy issue of DP could be talked about in a more open environment.

“I find that, while I was campaigning, doing public talks, going into school, educating people about direct provision, the way that people related to it was…You know, many of these stories are very sad. You’re sad having these conversations. So Our Table brought a different element whereby, you’re actually talking to people while eating. You’re enjoying a meal as you communicate. You’re breaking barriers.”

Having gone to Ballymaloe Cookery School to gain experience for running her own kitchen, Ellie now employees 12 people, as well as having volunteers who have also gone through the asylum system.

“It’s a diverse group,” she smiles. “Asylum seekers are not allowed to work when they’re in DP. So this gives a platform for them to go out and meet new people and work. And for those who are in refugee status, they can get a job here, they can learn the skills which will actually help them in the future.”

Running a kitchen might be one thing, but at the start of the year Ellie announced that she would be running in May’s Irish council elections, in Dublin-West. What led to her making that decision?

“I wanted to run because I’m a campaigner and an activist and because I’ve achieved a lot from talking about DP,” she states. “I’m almost a decade here in Ireland. When I first arrived, there wasn’t a lot of new communities in Ireland. That’s changed now. And I feel like we don’t have a voice. Not only that we don’t have a voice, but even me who has come here as an asylum seeker, I feel like our story isn’t being told the way it could be. This needs changing. And if I can run and get this office, I’ll contribute on a local and a national level, because it’s not only work the work I do in Dublin – I’ll be known in other constituencies. And then in the future who knows what might happen? (Laughs) I might come up to be a Minister, or a TD!”

Is that her ambition?

“Well my ambition is to make Ireland a better place,” she says straightforwardly. “This is the only thing I can do to make that happen. I’ll be able to contribute as a social entrepreneur, I’ll be able to help migrant people. But not only that, I’m representing everyone. I’m a woman. I’m a single mother. I’ve dealt with homelessness. I’ve raised my kids on the poverty level. And these are the issues which many people are dealing with here in Ireland. So by me experiencing these situations I’ll be able to say to other politicians (taps the table strongly with her hand), ‘Yesterday me and any kids – we didn’t eat! And there are five hundred people behind me who are the same! So what are you thinking about us?’”

Ellie was born to a strongly political family back home in Malawi. Her father, a property developer, was someone who she describes as having “a hand in changing” the country. But after falling out with a powerful figure in Malawian politics, Ellie’s father died under suspicious circumstances. She remained active after this, taking part in student protests throughout 2008-2011, when political unrest was at its height in the country. But government reprisals and deaths meant that Malawi was becoming an increasingly unsafe place to live in.

“There was a lot of protests, a state of emergency, and those were the things that affected me. So those are the reasons that led me to leave Malawi. But you have even seen me here in Ireland. I’m very open outspoken person. (Laughs) If I was in Malawi I’d be chopped off. But here in Ireland I can actually do this. I have all these frustrations but here I can still go on and speak my mind in this country.”

After arriving in Ireland, Ellie was placed in the Balseskin Reception Centre in Finglas, which, nine years later, is still where she lives. She has experienced the direct provision system at its most tragic. The unending wait for someone to hear your story, examine your case. The slow torture that thousands of asylum seekers face.

Direct provision was formed temporarily, by the Irish State, when people were just arriving in the ‘90s,” she says. “It was set up just for six months, but now it’s almost 20 years. While you’re living in direct provision as an asylum seeker, you’re waiting time can be crucial. It can be from one day to years and years. And in that time, you’re not allowed to go to third level education. You’re not allowed to cook. You get an allowance of 21 euros a week. You’re not allowed to seek employment. Basically, you don’t have any rights at all except to sit and wait for your case. So you can imagine, if somebody is waiting for their case for over five years and they haven’t even worked for all that time, you become unemployable.

“Then there’s the other side of it. Many people come through DP and eventually they get a status. But you can imagine – you take 50 people and put them somewhere for all that time, then tomorrow, you give all of them status. But they can’t function in a community, so what kind of atomic bomb are you creating? These are the issues that people shouldn’t overlook. And we have to look at these issues with a really sympathetic eye.”

While working as both a chef and an activist, Ellie came into contact with Social Democrats Councillor Gary Gannon. He helped her find a political focus in Ireland.

“For my work that I do for people in direct provision – I get lots of calls, I work with a lot of people, and I can’t help all by myself. So I have to trust people. Gary Gannon was one of those people who I knew could trust. He knew my background and was very engaging. And the way that Gary handled the Magdalene Laundries [Gannon proposed blocking the sale of the last Magdalene Laundries in order to make it a memorial to victims], I knew he was someone who…” She pauses to consider her words. “He was someone who seemed to understand another person’s pain without having experienced it himself. I felt he understood my story. And through him, I started knowing other party members. And there’s a bit of me that thought, ‘I’ve been in Ireland and I’ve achieved so much. This is home. Why can’t continue with my life? Why can’t I run?’”

Ellie was given another publicity coup whenever failed Presidential candidate-turned-far-right conspiracy theorist Gemma O’Doherty shared a tweet about her running for council elections. Original intended to provoke outrage from some of Gemma’s more close-minded followers, the idea backfired, with many – myself included – hearing about Ellie’s story and all the good work she’s done in Ireland for the first time.

“I don’t even want for you to mention her name because I don’t want her to win – because I own the story now!” She roars with laughter. “That tweet was actually a big favour from her to me! Only from that tweet, I got 1,000 something followers. Now I’m meeting people who are telling me, ‘I’ll vote for you! I’ll tell my friends to vote for you on the first of May!’ It was a favour from Gemma, and I love her for that!”

Donations were flying in to your campaign under the Twitter thread…

But joking aside, has Ellie noticed that racism is on the rise in Ireland?

“I think it has risen,” she nods. “But I think it has risen because of the fear of the unknown…So if we can get the message out there about the work we’re doing – through newspapers, through magazines like yours – people will see the good side. There’ll be unity at a certain point. What they hear at the minute is that people are coming here, living in hotels, taking benefits. But that’s not the full story. I’m running from inner city Dublin. You know the problems with Dublin inner city. There is poverty, there are drug issues. Problems which affect everyone.”

Ellie’s activism was also highlighted when she was asked to appear in Hozier’s ‘Nina Cried Power’ video, alongside other Irish figures who embodied the spirit of protest, dissent, and social justice in the country. How did that come about?

“They contacted me themselves,” she explains. “It was very moving being involved. I was a bit emotional because I was told he wanted to honour the civil rights activists, so for me to be there it was actually a very important thing. And for me, to get that phonecall – ‘Hello, I’m John, Hozier’s brother, I’m doing this video and I want you to be part of it’. I was honoured, he’s such a national treasure. And I knew of Mavis Staples, so I just had a feeling that the song was going to be about some kind of struggle. We were given the song to listen to a couple of times. I remember, the first time I listened I wasn’t really…I was sort of bland about it. Then the second time I was like ‘Oh…I’m really hearing this now.’ Then the third time… I just started crying!”

Ellie Kisyombe : Make Yourself At Home 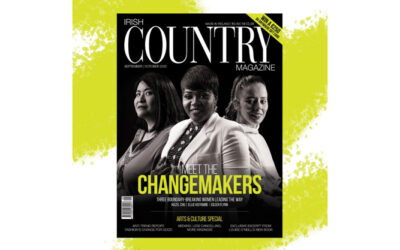 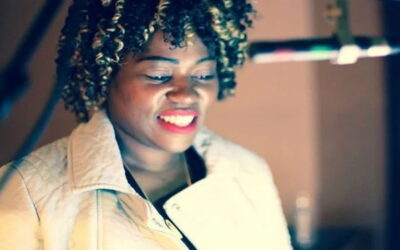